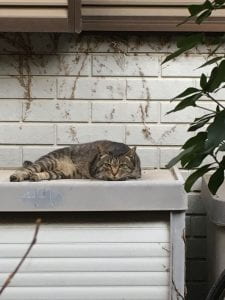 A year ago this cat came to our neighbor’s garden. I noticed his ear was clipped which meant that he was a male and he had been neutered. So, it was okay (legal) to feed him.

We named him Milo. He eats and sleeps in our garden but also sleeps in the neighbor’s garden. He stays away from us when we come near, but he has made himself at home. Look how happy he is. 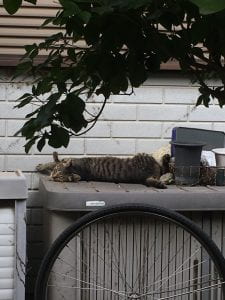 I thought Milo would keep other cats away, but this yellow cat has come twice this summer wanting something to eat. Milo shares. 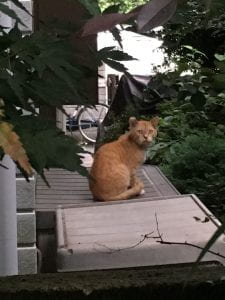 Both ears are clipped. Here he/she is sitting in the neighbor’s garden. I am inviting him to eat.

I don’t think Milo will share his winter house. 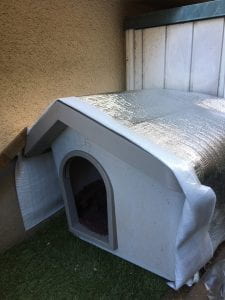 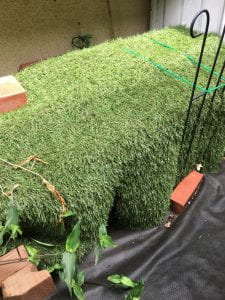 House and “porch” covered with artificial grass. Have plans to redo.

Here is Our History with Kittens and Cats

On 9-11-07, we rescued four little kittens in a neighbor’s garden. The neighbor couldn’t handle it. And the mother hadn’t been around. I had never had a cat in my life before. I was the one who was rescued.

The Cat in Beyond Me, a middle grade novel set in March 2011 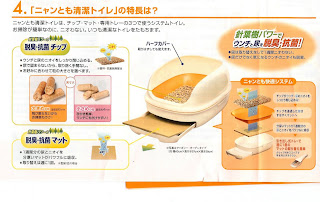 The litter for this litter box is made out of recycled wood chips. The litter can be used for one month. Urine goes down through the grated tray and is collected in a block of compressed wood chips. The blocks need to be changed each week. For two cats more often. This system is so much easier than other cat litter. Our box has a cover so that the cats have privacy. 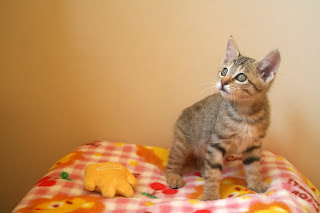 I found this kitty in a shed on Oct. 31. I put her in a box and took her to the vet. The vet bathed, de-flea-ed and wormed her and kept her for a few days. We’re looking for a home for her. She likes to play, watch TV, and cuddle. She’s a sweetie. Our dogs love her, but one of our cats, Toto, hisses at her. 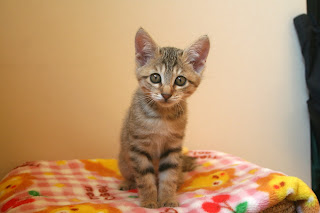 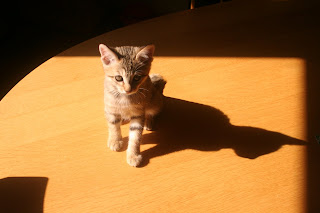 When Papa saw her, he said, “I think this cat is our cat.”

He was right. She became part of our family.

We have been catless upstairs. The cats we rescued two years ago ended up living downstairs after I went back to Texas to be with my dad for the month before he died. 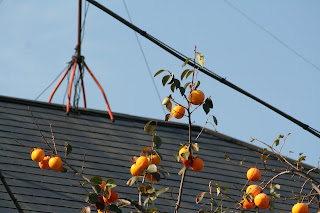 No party yet this year. Little Brother came home Friday with a fever. H1N1 is making its rounds here. It is called Type A. Fortunately, he doesn’t have that flu. Just a cold. So no happy Halloween for us.

Something exciting did happen today, though. I rescued another kitten! I heard it meowing in a shed near the field behind our house. Click on the label below. We will take care of it until we find a home for it. She’s spending a couple of days at the vet.

Click on the label below to see what we’ve done in the past for Halloween. I wanted to post a photo of something orange so here’s a persimmon tree. The kitten is orange, but I didn’t get a picture of her. 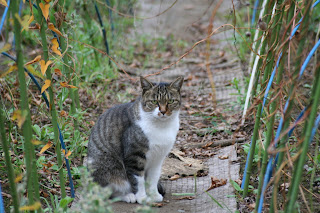 Yesterday I saw one of the cats we caught last year. He’s the one who got caught eating the fish head I had for another cat. We took him to the vet to have an operation. He looks healthy and well fed, but he doesn’t look very happy to see me. Click on the label below to see more posts about cats. 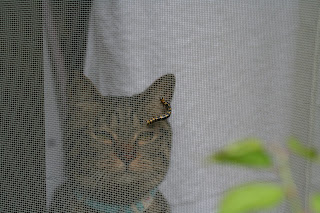 The garden is crawling now with caterpillars and young ladybugs. Toto is keeping an eye on this one climbing the screen door. I moved it out of danger because Toto and her sister Nana were very interested in it.

I moved it onto one of great grandfather’s bonsai trees. I don’t know what the caterpillar will be. I can’t find it in any of our bug books. I’ll keep my eye out for it. 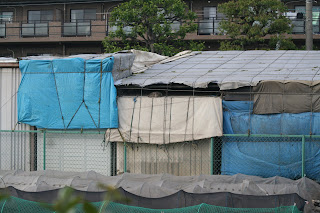 I picked up the stray cat from the vet today. I carried it in a cage down the street to our garden to release it. It ran off to a shed across the field when I opened the cage. Later in the afternoon I saw the cat sleeping on the roof.

It looked peaceful and happy. 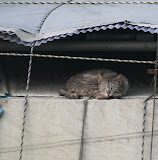 I woke it up even though I was using the zoom lens from far away! It has pretty eyes.
Click on the picture to enlarge it. 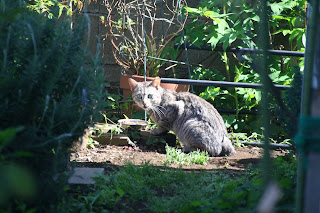 Another stray cat has come to our garden. This one sits by Baba’s window and talks to our cats. I wonder if the cat is a long lost brother or sister. I thought I rescued all the kittens that day from the neighbor’s garden. I hope so.

I’m going to run/walk to the vet’s to get a cage. It may be difficult to catch the cat today because I fed it this morning. This will be the fourth cat I’ve caught and had spayed. It’s expensive, but we can’t rescue any more kittens. That’s a big job! And we can’t turn our back on them either.

The cat is posing. She/he is lying on the shed where I found our kittens almost two years ago. This is not the mother. Ears are clipped to show a feral cat has been spayed or neutered. Click on the picture to enlarge it. 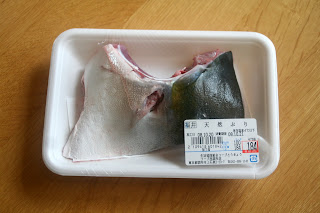 We rescued four stray kittens from our neighbor’s garden last fall. We caught their mother. We took her to the vet to be spayed so she won’t have more kittens. This fall, a young cat is coming to our garden. We’re trying to catch it to take it to the vet. There are many stray cats in our area. Feeding a stray cat without having it spayed or neutered is prohibited. There is a volunteer group that is trying to catch all the cats. They want to spay and neuter them and then release them. They lent us this cage. 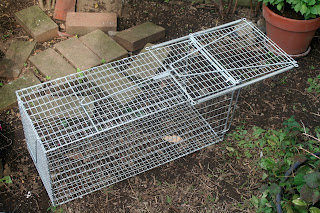 The young cat is very clever. We’ve been trying to catch it for more than a week. The vet suggested tying a fish head in the cage. I tried that, but I caught the big Papa cat instead. We took him to the vet. I had to buy another fish head but couldn’t find one. I bought this piece of fish instead. I hope we catch the young cat!

P.S. I caught another cat instead! A big tomcat. Then after a big effort I caught the young cat. Yikes, this is expensive! 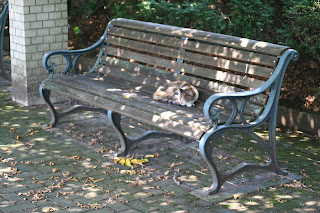 Can you see what’s there? Someone almost sat down here. 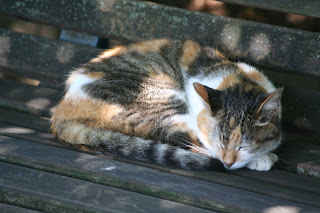 This feral calico cat did not stir. It’s not unusual to see cats in the Jindai Botanical Gardens. Calico cats are not common here, though. Elizabeth Coatsworth wrote about one in The Cat Who Went to Heaven. It’s a nice story set in Japan. It’s one of our favorites. The author said three colored cats were considered lucky. This cat was fortunate to have a safe place in the sun and in the shade.

This picture was taken on the 10th. It was a beautiful bright day. It drizzled all day today. 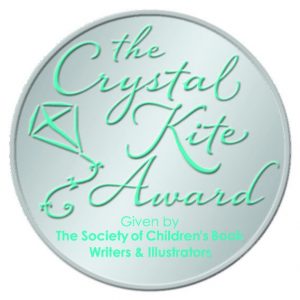 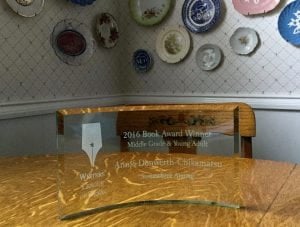